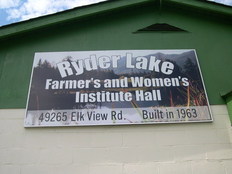 History ​​is preserved in public buildings,
​museums, libraries, universities, archives
​and heritage buildings. It provides a link to
​our culture and makes us realize who we
​are. We learn from the past which plays a
​role in our everyday lives. Often decisions
​are based on what was before us. We
​cannot move forward if we do not
​acknowledge the past.

In 1904 Bill Voight arrived in British Columbia from Barlin, Wisconsin, U.S.A. He settled in the small hillside community of Parsons Hill now known as Ryder Lake.Mr. Voight built a log cabin on the corner of Elk View and(No.4) Haley Roads. He worked as a miner for 30 years, spending most of this time at the Red Mountain Mine. Later Voight was a saw filer for Orion Bowman and Company.

The cabin measures 16X16​​ feet and is a basic one room structure. The walls consist of three logs, dovetailed on the corners. The cedar logs were cut from fire dried cedar snags that were readily available on Voights property. Shrinkage, peeling and drying was completed by a natural process. A broad axe and a hand saw were the only tools used by Voight. The axe had a wide blade and a heavy head that took physical strength and skill to use. Mr. Voight had both characteristics along with knowledge of construction.

For decades the Bill Voight log cabin sat on the property of his nephew Billy Voight and his wife Blanche. After years of neglect, the cabin fell into disrepair. Time was running out if the logs and documented history were to be preserved. Wanting to save a piece of Ryder Lake history, Ryder Lake Women's Institute members worked towards a legacy project. The present property owner Ken Schellenberg donated the cabin. Log by log the cabin was dismantled and each log carefully numbered. They were loaded onto a wagon and transported to the property of Hugh and Dalyn Sexsmith on Ryder Lake Road.

After delays, the project finally became a reality when Hilbert Corbett of Hope Ready Mix donated gravel and cement blocks. Hugh Sexsmith, Wes Barber and Phil Mazurenko volunteered their expertise and materials. The preservation project was now off the ground.​​​​

Men who worked on the cabin were amazed at how little the logs had deteriorated in over 100 years.

The Voight cabin sits on cement blocks and fir timbers.  The timbers were cut and donated by Wes Barber.  Cedar shakes split by Hugh Sexsmith provided a new roof put onto new beams.  New gutters and a porch will protect the logs, hopefully for another 100 years.  Where the climate is cooler, a chimney is located inside to maximize heat retention.  A new door and hinges were crafted by Phil Mazurenko.  A lean-to on the original cabin was not added.

Minor changes were necessary to preserve the cedar logs.  Wanting to keep the cabin rustic, there is no running water or electricity in the structure.

Period artifacts have been donated by local residents, former residents, friends and Women's Institute members.  The artifacts connect to Ryder Lake's past making the cabin a Ryder Lake museum.

A recent visitor with knowledge of British Columbia's forest industry commented on the good condition of the logs  he was intrigued with the project.

The cabin may be viewed at Alpine Nursery on Ryder Lake Road.​​​​​​

While Bill Voight was away to work, his neighbours William and Bertha Walters lost their home and belongings to fire. Mr. Voight​​ sent word to the Walters offering his cabin to the family. Will, Bertha and two small daughters, Ethel and Bertha lived in the log cabin until Mr. Walters could rebuild.

In later years, Bertha Barber nee Walters told of the day the family home burned to the ground. She was four years old in 1917 and clearly remembered the fire.​​
​​ 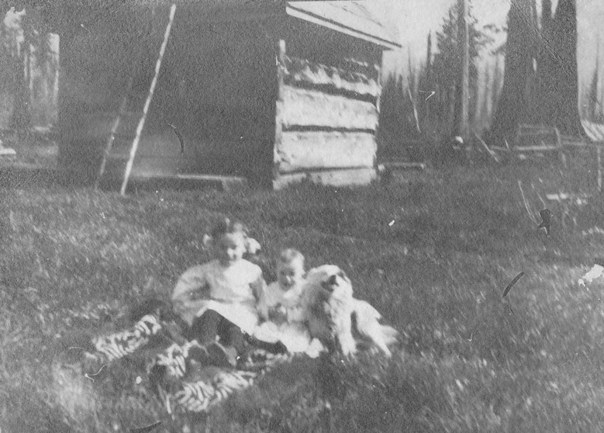 1917
Bertha and Ethel​ Walters with their dog
Salor Voight cabin in background​
Note by Bea:
​It is 2012 and I have s slight memory of Bill Voight. For years I rode by the log cabin while on the school bus; 1945 - 1957. When picking black caps with my grandmother, the little log cabin sat in plain view across the road. The late Bill Walters Jr. and Stan Ross both described Bill Voight as a quiet, and hard working man.
Ryder Lake Early Settlers Honoured

This memorial is place on the site of the Superior Shingle Mill
​circa 1925 and the Mainland Sawmill that closed in1929.
​Cedar trees grew as big as twelve feet in diameter and provided
​employment for many men. There were bunkhouses, stables
​and a cookhouse. It was the hub of the community where the
​cookhouse became a dance hall and meeting place during
​weekends. The harmonious music of fiddles, accordions,
​guitars and a banjo echoed around the normally quiet hills of
​Ryder Lake.
The memorial is raised to commemorate the early settlers of Chilliwack Bench, later Parsons Hill and now Ryder Lake as of 1925.
Pioneers came from many locations and walks of life, mainly from Canada, United States and the United Kingdom.
The new area was well organized with a constitution written by the Settlers Association of Chilliwack Bench. The constitution was followed faithfully.
The settlers were self sufficient building roads, schools and a community hall. The last major effort of the peoplewas the construction of the Ryder Lake Institute Hall which opened in 1963.
A large sign hung in the Ryder Lake Community Hall, 1934 --1962, that read Harmony And Unity Made Our Community.
People relied on one another and socialized within the community.
This memorial has been placed here by families of the early settlers.
July 2013. 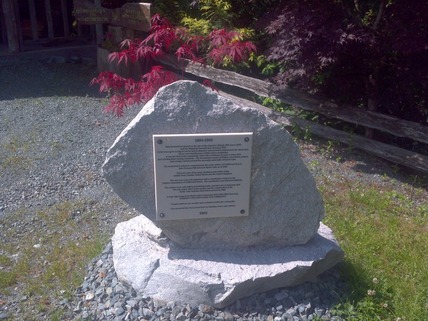 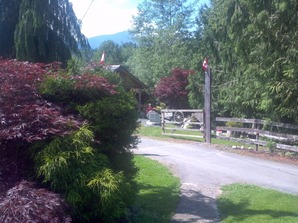 ​Elk Mountain Forestry Lookout was located high on the mountain at the end of Lookout Road. A further climb from here came to a B.C. forest service tower that was built in 1945. Visitors stood in wonderment at a view not anticipated. Ryder Lake resident George Petit was the first forest ranger.

Records show that visitors arrived from all Canadian provinces, the Northwest Territories and many states in the U.S.A. Other visitors were from England, South Africa, Holland, Germany, Australia, Switzerland, Ireland and the Isle of Man. Every Ryder Lake resident and hundreds from Sardis, Chilliwack and the Lower Mainland signed the visitor books. Lionel J. Kirkham arrived on June 13, 1954 to inspect instruments used by Vic Brown.

Brown stood watch for fires from May to September where he resided in a small cabin. It was not a lonely stay with so many curious visitors.

The Fraser River eastward to Mount Cheam, Harrison Lake and Harrison River, Cultus Lake and stretches of Chilliwack River, Chilliwack and Sumas Mountains and mountains to the north were all under the watchful eye of forest ranger Brown.

While enjoying a picnic lunch, one could gaze in all directions where the view could be described as breathtaking and unusually spectacular.

The drive up Elk View Road was scenic on a narrow, gravel, tree lined road. There was wildlife and attractive small hobby farms along the way that added to a delightful day at Ryder Lake.

The last entry in the visitors book was written on a piece of paper dated July 3, 1962. The message read, "please put our names in your visitor book, sorry to have missed you." They were visitors from Kamloops and Agassiz B.C. It was taped in the book by Vic Brown.

Jack Pulling, chairman of Publicity and the Tourist Bureau and the Ryder Lake Women's Institute hoped to have the Lookout designated as a tourist attraction. High costs prevented the plan from going ahead. The 40 foot tower was dismantled in 1962 --1963. A communication tower sits on the site today.

For many, these were memorable years. The hikes and picnics along with friendships are truly unforgetable.
​
The Elk Mountain Lookout visitor books, valuable Ryder Lake historic photos, albums,artifacts and Documentations have been removed from the Ryder Lake Farmers and Women's Institute Hall.

For reasons of safe keeping and preservation, owners of the collections will eventually donate them to the Chilliwack Archives. 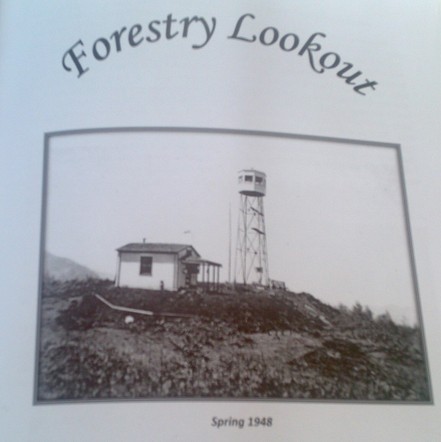 ​​Graham Evan MacDonnell, BA a historian recently gave a power point presentation at the Tretheway House
Heritage Site in Abbotsford. His knowledge of past railways and streetcars brought attention to the importance of early rail travel and transporting of goods.

Previous to the presentation, Mr. MacDonnell ​​phoned to ask about streetcar 153 that served as a cafe at Ryder Lake during the 1940's. Mrs. James Hale's Streetcar Cafe was a popular meeting place for the locals and Sunday​ tourists. It was located on the corner of Elk View Road and Haley Road. Graham MacDonnell had researched the history and read the book Ryder Lake The Place The people.

Streetcar 153 sat in the Ryder Lake community for about three decades. It was part of the scenery sitting beside the historic Bill Voight log cabin. This was an unusual site and most people did not know of its interesting history.

I remember the day in the 1970's when BC Hydro moved old 153 from the Bill Voight property. The streetcar was in a fragile state. On the way down Elk View Road, it shifted on the trailer near the Barber place. This caused some anxious moments but finally the streetcar  made its way down the hill from Ryder Lake coming to rest in North Vancouver.

Years later the 1908 streetcar was restored. In its day it was considered to be state of the art, one of the classics of streetcars in North America. For years it ran​​ the Lonsdale route in North Vancouver.

Few streetcars of this era were restored. It is wonderful to know that the North Vancouver Museum​​ displays streetcar 153. 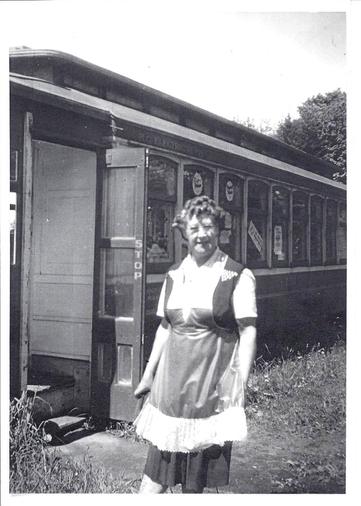 Several Ryder Lake pioneers were employed at the Red Mountain Mine in Whatcom County U.S.A. Fred Ross was a cook in a Government Camp in 1909. Ross discribed working conditions as menacing with bears and pack rats. The cook house was made with poles covered with a canvas tarp. Supplies were delivered regularly by a train of pack horses. The men were building sled roads to move machinery into the gold mine site at Silecia Creek U.S.A.


​​​​​​​​​​
​​​​​​​​​​​​​​​​​​​​​​​​​​​​​​​​​​​​​​​​Bill Voight, another Ryder Lake pioneer worked as a miner for 30 years spending most of this time at Red Mountain.
Later Bridge Bailey was offered the chance to buy Ed Allison's pack train that transported supplies to Red Mountain and the Silver Chief Mine. Bridge was an adventurous character who managed to haul the freight on trails of steep terrain with 32 switchbacks. He hauled hundreds of pounds of equipment and groceries that included dozens of fragile eggs. Each horse packed as much as two and three hundred pounds of goods. On his return trip Bridge carried gold bullion moulded into muffin shaped tins and some gold bars. Arriving back home in Sardis, he then transported the gold to Sumas, Washington.
Bridge carried a .38 Smith and Wesson handgun given to him by the U.S. Customs Patrol for safety reasons.


​​​​MOUNT BAKER MINES. March 1900
Ryder Lake pioneer Frank Haley employed at the Mount Baker Mines, Whatcom County met with a frightening situation in March 1900. Caught in a snow slide, he was carried 200 feet into a ravine below. This was rugged mountain terrain and workmates had no hope of Franks survival. They reported his death on their arrival into town.
Miraculously, Haley freed himself and found a miners cabin supplied with food and blankets. He walked into town six days later.
Haley Road at Ryder Lake is named after this lucky man.

The Bridge Bailey story was given by his daughter Dalyn Sexsmith, née Bailey. 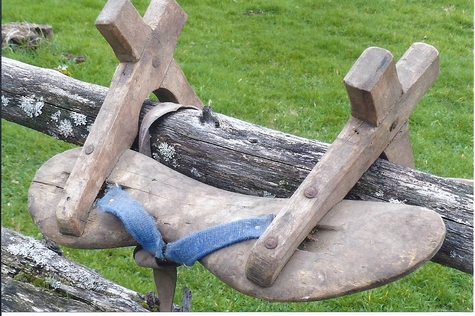 Pack saddle used by Bridge Bailey when hauling to Red Mountain Mine.  Saddle on display in the Bill Voight log cabin. 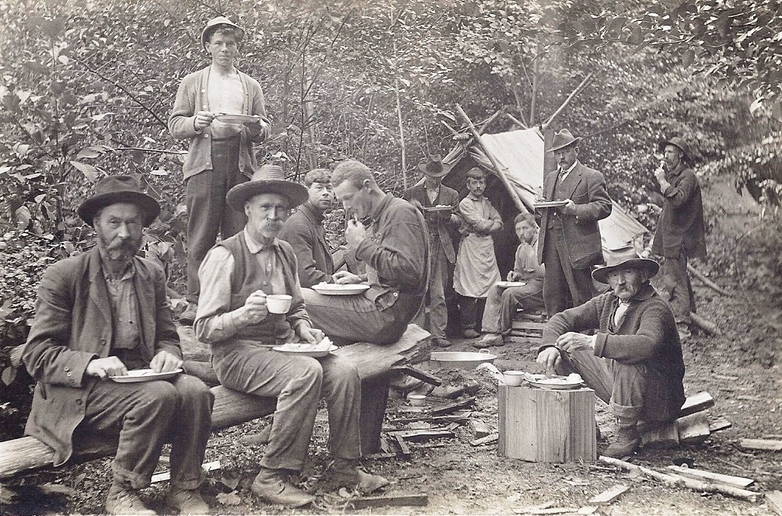 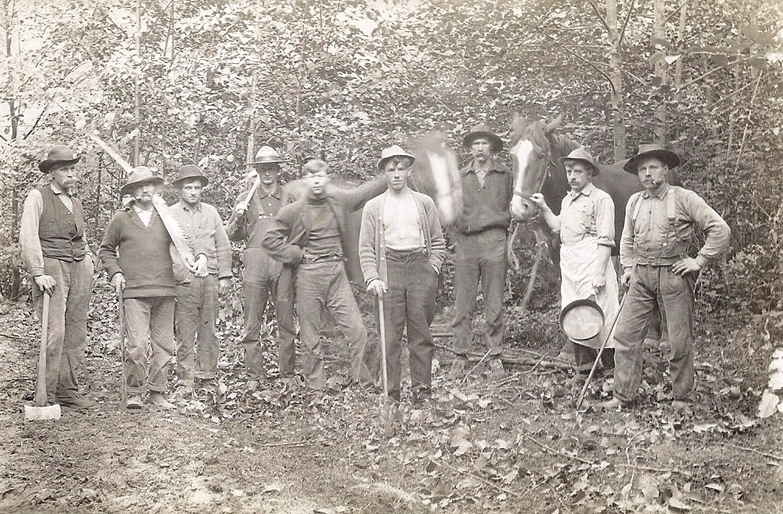